She is waiting for him in the hotel bar

She looks even better than he expected

She knows he is nervous

She looks up from her newspaper and smiles He begins to relax as he knows that she is not angry at his late arrival They order drinks and begin polite conversation She licks her red lips and his mind receives vivid, carnal images of the things she could do with those red lips She looks deep into his eyes and even deeper into his soul. 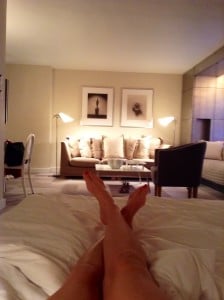 It’s not clear what it is about her However, the curiosity is there inside him She is an experienced woman. It is a delectable thought A woman in control of her own mind, body and pleasure A woman with the ability to compartmentalize like a man. What a joy it could be to have an affair with such a woman She moves confidently Her figure curves in all of the places that it should Her voice is soft, deep and foreign he wants and desires her. She is a woman that one man could never own. She is a woman, that can share her love unselfishly, until it is time for her to move on to the next. He knows, she will only be there for this journey He is there for the adventure, then she will leave. She is enigmatic and sensual with much hidden inside her black eyes Where does he begin? She is the Jet Set Mistress

Want to join the discussion?
Feel free to contribute!

This site uses Akismet to reduce spam. Learn how your comment data is processed.